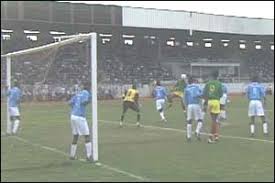 After the game was introduced by Italian colonialists in 1930, football in Eritrea enjoyed its heyday during the 1970s, when around 155 teams took part in the national championship, which comprised three divisions and a youth competition. Eritrea has always had talented footballers and it is little wonder that in 1962, with the nation under Ethiopian control, 90% of the players in the Ethiopian squad that won the 3rd African Cup of Nations were of Eritrean origin. Following its independence in 1991, Eritrea immediately joined the regional and continental confederations.

Each Eritrean national is obliged to carry out military service until the age of 40. In

April 2002, the Eritrean military team won the football competition at the African Military Games in Nairobi (Kenya) and went on to represent Africa in the Military World Games in September 2003.

Information Minister Ali Abdu told the BBC they would get a “good welcome” despite “betraying” their country.

He confirmed reports that 12 players had not returned from a regional tournament in Kenya.

The UN says hundreds of Eritreans flee the country every month amid reports of government repression, poverty and a harsh national service regime.

But the government denies that Eritreans are fleeing and accuses the UN of lying about the figures.

Mr Ali told the BBC’s Focus on Africa that the disappearance was “not good news”.

But he said: “This is their country. They are entitled to live and work in their country, if they come back.”

When the plane returned to the Eritrean capital Asmara from the Cecafa competition for East and Central African nations last week, it was reportedly carrying only the team coach and an official.

The government had earlier denied any players were missing.

Cecafa head Nicholas Musonye told the BBC programme it was the third time the Eritrean team had failed to return home after a tournament.

Eritrean Football to the Top

Officials have launched a search for Eritrea’s national football team after the players reportedly failed to return home following a tournament in Kenya.

The Eritreans were knocked out of the Cecafa competition for East and Central African nations last week.

But when the team plane landed back home, it was reportedly only carrying the coach and an official.

The government, which is frequently accused of repression, denies any players are missing.

But the country’s football federation confirmed to Cecafa head Nicholas Musonye that the players had not returned.

Mr Musonye told the BBC’s Focus on Africa programme it was the third time the Eritrean team had failed to return home after a tournament.

“The Eritrean federation have done their best to bring a team to the competition – unfortunately these boys had other ideas,” he said.

“Definitely they are in Nairobi – we have so many Eritreans here – they must be somewhere.”

He said he would establish the facts and hand the details on to the police.

The UN says hundreds of Eritreans flee the country every month.

A group of eight who have joined Shettleston Harriers could reshape the Scottish athletics team and re-write the record books when they become eligible, though that won’t be until 2013 at the earliest.

The Glasgow East End club has an honourable history of community conscience, dating back to when Allan Scally of Broomhouse funded soup kitchens during the Depression from his winnings. He is commemorated in an annual autumn road relay. The club has welcomed the Eritreans, six of whom ran in Edinburgh at the world cross-country championships on March 30, and have signed them as members.

They declined to return home to the military where forced labour, imprisonment, and torture are rife. Stripping down a Kalachnikov is part of their studies. Army prisoners, deserters and conscription evaders are routinely sent to prison camps on the islands of Dahlak and Naqira, the latter being where Ethiopian Emperor Haile Selassie once sent political prisoners who were rarely seen again.

The club has bought them kit and shoes. Glasgow running shop Achilles Heel provided eight pairs of racing shoes at cost price on hearing of their plight, and four of the men will make their competitive debut in Shettleston’s blue and gold on Wednesday evening in a 10k race at Troon.

Tsegai Tewelde, a world junior 1500m finalist at 16, urgently needs physiotherapy treatment for an injury, but has no money to pay for it. They arrived with just a few dollars between them and were billeted in the Red Road flats.

The three girls in the team which ran at Holyrood will make their debut in the women-only 10k in Glasgow in a fortnight.

He covered the 10-mile Lanarkshire course in a record 50min 20sec.

“They have already arranged to have their coach in Eritrea email their schedules. We are surprised these sessions seem relatively easy. However, that may be because the schedules are geared to training at altitude.”

Tewelde, was one of three Eritreans in the top 20 in the junior race in Edinburgh (the first Brit was 24th). The younger brother of defending champion Zersenay Tadesse was selected but was stranded in Cairo, waiting for a visa. Otherwise the team which won world silver last year would have been in contention again. The group also includes a 13:35 5000m runner and a 62-minute half marathoner.

Kokob Mehari was just 16 when she finished 78th in the senior short course race at the world championships. She has since won bronze

at 800 and 1500m in an African continent junior event. Her 1500m best of 4:20.1, aged 16, is more than two seconds faster than the Scottish record for that age. It was once held by World, European, and Commonwealth champion Yvonne Murray. In Edinburgh Mehari beat four of the GB team.

Chichi Germai says her best marathon and half marathon times are 2:40 and 75 minutes respectively. No more than modestly decent, until she says: “That was in Asmara.” Her country’s capital lies at nearly 8000 feet.

Britain’s current best male endurance athlete is also from the Horn of Africa. Mo Farah arrived from Somalia aged eight. He is now European silver medallist at 5000m. Tomas Abyu, the No.2 GB marathoner, fled from Ethiopia. Two former members of Britain’s team, Birhane Dagne and Kidane Tadesse, are Ethiopia-born. They were granted asylum when they declined to go home after a world championship on Tyneside, but the culture shock is stressful, and another Ethiopian athlete died in England in tragic circumstances.

“We would welcome such athletes, subject to compliance with the rules. They would have to be selected by Scottishathletics, have a GB passport and be resident here,” said Scottish Commonwealth Games Council chief executive Jon Doig. The time frame would mean Glasgow 2014 at the earliest.

Scottishathletics is aware of the arrival of the Eritreans, confirms chief executive Geoff Wightman, and they are in touch with Shettleston. It may be five years before they can run for Scotland, but there is the potential for a rare learning experience.

Shettleston Harriers are already alert to it.

The Eritrean National team, the Red Sea Camels will take on the Kenyan Harambee Stars in Asmara this weekend. Eritrea beat Kenya in Nairobi by the score of 2-1 even though the ref in that game gave Kenya a penalty kick at the end of the game which they missed. As a result the Eritrean head Coach Mr. Dorian Marin was suspended for protesting the terrible call. Mr. Marin who will coach his last game for Eritrea because of his contract must be commended highly for turning Eritrea’s program around.

For those who don’t know Mr.Dorian Marin, who is he? and where did he come from? Well Mr. Marin was born in Romania, home of one of the best soccer teams in the world in the 1990s with big stars such as George Hagi who by the way can go down in history as the most exciting player to come out of Romania. Mr Marin was a student at a soccer school known as Bakoz in Romania and he went on to play professionally in Romania and Italy between the ages of 17 & 34 years. Mr. Marin then went on to coach in places like Syria and Lebanon where he was able to help teams achieve success.

The Eritrean team must win this weekend and that will take the Red Sea Boys a step closer to making history just like the under 17 team did in Togo. Ghana is the venue for the 2008 African nations cup. Meanwhile Kenya will come into Asmara prepared as they plan to over take

a second place in the division. They defeated a strong Rwanda team that made it to the nations cup in 2006 by the score of 2-0. Eritrea can’t miss opportunities like it did against Angola a couple of weeks ago and also the Redsea Boys must not under estimate their opponents.

Advantage for Eritrea is the fact that they are playing at home and they have always played well against Kenya. A clear indication that the Eritrean national team is doing well is that in just 16 years of existence as a nation the national team has reached it’s highest ranking ever in FIFA.

Kenya comes in as an underdog for the first time ranked below the Eritreans by one point.

This will be a historical day and a memorable day for Eritrea as Coach Marin will be present for his last game. The Eritrean national team has also called up two youth national team members to replace two players that were suspended with cards. Goal scorer against Angola Elias Ali and Tesfalidet Goitom both got two yellow cards each. Dahlak Tecleab who was a star player for the Eritrean under 17 side will replace Elias Ali while Professional player Elias Debesai will replace Tesfalidet. Meanwhile Kenya’s biggest star Dennis Olisheh will not play as a result of an injury during the harambee stars 0-0 tie against Swaziland. Swaziland will face Angola in the other divisional game.

Flavio scored twice in Angola's 6-1 thrashing of the Eritreans

Six Eritrean footballers have requested political asylum in Angola after their 2008 African Cup of Nations qualifier in Luanda on Sunday.

“Our role is to determine whether or not it is possible to accord them the right to asylum after taking into account the reasons they have given,” he said on Wednesday.

The Palancas Negras beat Eritrea 6-1 to go five points clear in the group. The Eritreans are second.

Eritrea is a one-party state, with no free press of any kind.

We will Updated you soon ( adalvoice)