Ethiopia ‘using aid as a weapons…

Development aid in Ethiopia is alleged to have been withheld from those opposed to the government. These are longer-term funds aimed at poverty reduction, not the emergency aid currently needed to help those affected by the famine.

A joint undercover team from BBC’s Newsnight and the bureau of investigative journalism at London’s City University, travelled to Addis Ababa, the capital, and the south, posing as tourists. They spoke to farmers in the south who supported the opposition. The farmers said they were deprived of fertiliser and seed for their crops. The team also found evidence that people had been tortured for their political beliefs. An opposition politician described scenes of torture, men hung upside down, immersed in water and given electric shocks.

The Ethiopian embassy in London refuted (pdf) the allegations.

One Ethiopian grandmother of four, who arrived at the Dadaab refugee camp in northern Kenya last month, said how soldiers killed her son in front of her and than jailed her for one-and-a-half years during which she was repeatedly raped. Another woman at Dadaab who had been accused of being a supporter of the Ogaden National Liberation Front, a rebel group, said soldiers stamped on her stomach when she was eight months pregnant, killing her child.

The report said foreign aid-funded “capacity-building” programmes are used by the government to indoctrinate schoolchildren, intimidate teachers and purge the civil service of people with independent political views.

HRW said political repression was particularly pronounced leading up to parliamentary elections in May 2010, in which the ruling party, led by Prime Minister Meles Zenawi, won 99.6% of the seats. The report was based on interviews with more than 200 people in 53 villages across three regions during a six-month investigation in 2009.

Farmers told HRW how they were denied access to agricultural aid, micro-loans, seeds and fertilisers because they did not support the ruling party. One farmer in Amhara region was quoted as saying: “[Village] leaders have publicly declared that they will single out opposition members, and those identified as such will be denied ‘privileges’. By that they mean that access to fertilisers, ‘safety net’ and even emergency aid will be denied.”

Ethiopia is heavily dependent on foreign aid, receiving $3.9bn in 2009. The World Bank and donor nations provide direct support to district governments in Ethiopia for basic services such as health, education, agriculture and water, and support a “food-for-work” programme for some of the country’s poorest people. The EU, the US, Britain and Germany are the largest bilateral donors. 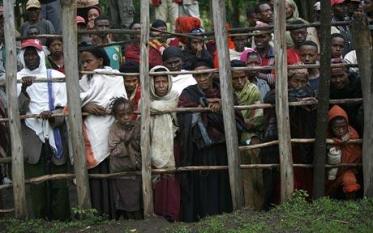 Following the Newsnight programme, the UK international development minister, Stephen O’Brien, said: “We take all allegations of human rights abuses extremely seriously and raise them immediately with the relevant authorities, including the Ethiopian government, with whom we have a candid relationship. Where there is evidence, we take firm and decisive action. The British aid programme helps the people of Ethiopia, 30 million of whom live in extreme poverty. We demand full accountability and maximum impact on the ground for support from the British taxpayer.”

The Ethiopian embassy in London said in a statement: “The Ethiopian government refutes absolutely the allegation that there is a policy or practice of extra-judicial killings, arbitrary arrest and routine torture by the police, prison officers and other members of the security services and the military. The Ethiopian National Defence Force (ENDF) fully understands the importance of serving the cause of the people.”

On the charge that aid is being denied to opposition supporters, the embassy said the claim had been refuted, not just by the Ethiopian government, but by the donors’ assistance group (DAG), a consortium of 26 donor governments and international organisations, after it had made thorough investigations.

Britain gave £214.3m in aid to Ethiopia in 2009-10. In its operational plan for Ethiopia, covering the next four years, the Department for International Development said: “The Ethiopian government is capable and committed to growth and development, and is a proven partner in making rapid progress towards the millennium development goals. But its approach to political governance presents both substantive challenges to sustainable development and reputational risks to partners.”