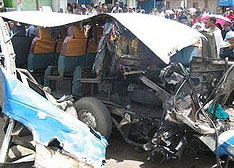 Recently released Wikileaks Ethiopia files expose how Ethiopian security forces planted 3 bombs that went off in the Ethiopian capital Addis Ababa on September 16, 2006 and then blamed Eritrea and the Oromo resistance for the blasts in a case that raises serious questions about the claims made about the bombing attempt against the African Union summit earlier this year in Addis Ababa, Ethiopia.

In a report  from 2006 marked “Secret ; Subject: Ethiopia: Recent Bombings Blamed on Oromos Possibly the Work of GOE [Government of Ethiopia]” “Classified By: Charge [d’Affairs] Vicki Huddleston”, “An embassy source, as well as clandestine reporting, suggests that the bombing may have in fact been the work of the GoE security forces.” (Cable reference id: #06ADDISABABA2708.)

At the time, the western media reported the Ethiopian National Intelligence and Security Service (NISS) claims that the bombs were “part of a coordinated terror attack by the OLF [Oromo Liberation Front, the oldest national  liberation movement in Ethiopia] and  Sha’abiya (Eritrea) aimed at disrupting democratic development”.

The Wikileaks report goes on, “a typically reliable information source” who “contacted Post to report that” the bodies of three men found at the bomb sites “had been picked up by police a week prior, kept in detention and tortured. He said police then left the men in a house and detonated explosives nearby, killing 3 of them.”

This exposes the history of how the Ethiopian regime has planted bombs and then blamed Eritrea and the Ethiopian resistance. The lies that make up the official version of this alleged terrorist attack raises serious questions about the credibility of the recently released report by the UN via its US State Department affiliate, the Monitoring Group for Eritrea and Somalia, which blames the Eritreans and the OLF for the January bombing attempt at the African Union summit in Addis Ababa, Ethiopia. Identical lies about a nearly identical “terrorist attack”, all accepted as fact by the western media. This should also deliver another body blow to the Obama White House and its claims that Eritrea supports terrorism in the Horn of Africa.

So once again the bellowing against Eritrea by the USA and it lackeys at the UN going back to 2006 is exposed as complete bunkum and an identical frame up of Eritrean and the Oromo resistance in Ethiopia that has been regurgitated by the UN and its truth challenged Monitoring Group on Eritrea and Somalia must be subject to a more critical scrutiny. Based on this expose’ it can only be hoped that the UN inSecurity Council, which has yet to decide whether to pass severe sanctions against Eritrea, will refrain from doing so.