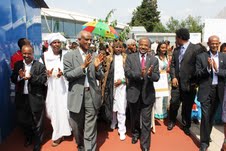 The colorful Eritrean Festival in UK, which took place in London, from the 13th until 14th July 2013 at Lee Valley, Edmonton, a magnificent tent arena, that would house the busloads that came from Manchester, Leeds, Birmingham, Liverpool, Sheffield, Nottingham, Coventry, Newcastle, Wales, Scotland & Ireland. Festival Eritrea UK 2013 was officially opened by  H.E. Osman Saleh, Minister of Foreign Affairs.
The opening ceremony was also attended by Eritrean Ambassador of the State of Eritrea to the United Kingdom and Ireland H.E. Tesfamichael Gerahtu, Enfield, representative on behalf of David Burrows; MP for Enfield Southgate, Councilor Erkan Hurer, representative of various organisation,  Friends of Eritrea, Community Elders & Religious leaders.
Speaking at the opening ceremony, the chairman of the British Eritrean Community, Mr Ahmed Mohammed, stressed the 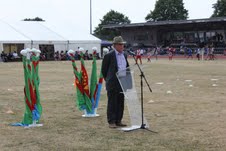 paramount importance of holding festivals in bringing Eritrean nationals together. It also has a vital role to play in reinforcing identity and bequeathing cherished societal values to future generations, he added. 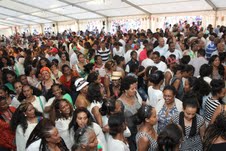 Eritrean Ambassador of the State of Eritrea to the UK & Ireland H.E. Tesfamichael Gerahtu also gave a welcoming speech, thanking the participants in taking part on the celebration of the 14th Eritrean Festival UK, there by updating the participants on current state of affairs. The Guest Speakers included Councilor Erkan Hurer, Dr.Tim Williams  CEO Andaimo Mining, William Spring, Director of CANA. 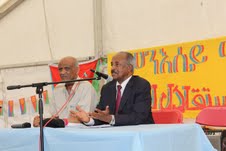 Mr.William Spring said on his speech;-  There is only one independent government in the Horn of Africa that has the vision and leadership quality to help bring such an idea.
Among st the highs of the opening ceremony were the cultural performances by the traditional  cultural group, which captivated the audience from each corner of the festival ground. Each and every face was filled with pride whilst the cultural group displayed a performance that was original overpowering the host culture. An exhibition that depicts the Eritrean culture and current developments in Eritrea was also opened for the public by the guest of honor. The exhibition also included paintings, photos and craft works from the diverse Eritrean culture and rich history, which depicted the exceptional history of the Liberation struggle in Eritrea. More than 32 Football Teams  took part at the sport competition and this year winner is Birmingham Kowakebti.
In a seminar he conducted with the participants of the festival H.E.Osman Saleh, Eritrea Foreign Minister, explained that 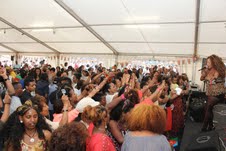 the Eritrean government is making enormous investment with major focus on the rural area with a view to ensuring social justice and sustainable economic development, and that increased endeavors would be exerted to give added momentum to the nation’s development process. He further pointed out that the country is in a stage where its bright future is becoming progressively evident thanks to the spirit of steadfastness among citizens inside the country and abroad in foiling anti-Eritrean agendas.
The Festival was organized across seven programs, which were children’s activities, family & community activities, arts & culture program, youth forums & ideas, sports competition. Thus, the main thrust of the program was focus on the activities of children, youth, families and communities in general. The above efforts have been very instrumental in consolidating national unity, national mobilization and organization, cultural transformation and the transfer of the values as cultural heritage to the next generation has thus been crucial in the independence of the nation, Fashion Show by Multi Award winner and best of 10 African Designers Zekarias Solomon. 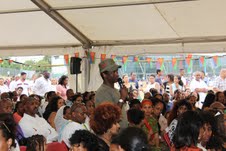 The 14th London Eritrean Festival was an important occasion for harmony, consolidation of Eritrean unity, strengthen the Eritrean culture and identity, promoting higher mobilization and organization, developing Eritrean capacity and ingenuity and finally for recreation and entertainment of Eritreans. Another unforgettable moment of the event was the music performance from the cultural group; Eritrean artists such as  sent the crowd wild which witnessed the high level of patriotism with a wave of the colorful Eritrean flag dominating the sight of every participant.
The closing ceremony was a colorful combination which created a nice view which prompted any viewer to stay tuned.  All the beauty and attraction, hearts of the participants and more noticeably of some member of the Zona  and cities  of UK who staged varied shows in Shows & Competition grounds for 2 consecutive days start to beat fast.
Who would become the winner of Eritrea Festival UK 2013 was their main concern. And it was time; a summarized report of the overall presentation and competitions held in varied fields was presented to the audience by the committee of Festival Task Force – Festival UK 2013  goes to Birmingham.
The lowering of the flag became the last event to seal the night and it was a spectacular event.
The Ambassador gave his closing speech, and after the flag was lowered the crowd processed to get  on the field that left the crowd wowed and asking for more.
Yared Tesfay
Embassy Media
London 15th July 2013