Fred Hollows was born on April 9, 1929 in Dunedin, New Zealand, the second of Joseph and Clarice Hollows’ four boys. 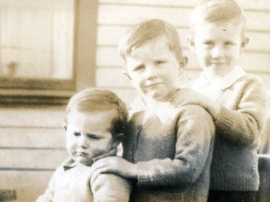 According to Fred, his mother and father were “very strong in the church”. The family atmosphere was respectable, teetotal and non-smoking, but not pious and not judgmental.

Fred was most influenced by his father, who was a kind of Christian Marxist, a pacifist with firm views about the basic wage. Joseph Hollows was a railwayman, the son and grandson of coalminers. He was also a keen chrysanthemum grower – a hobby he turned into a successful business when he retired and the family shifted to a small plot of land out of town.

As a teenager Fred enjoyed the Protestant Boys’ Brigade, camping and tramping about the country. He attended church enthusiastically, played trumpet in the Brigade band, and the bugle at school. He did well academically when he was interested, and played First XV rugby where his smaller stature meant he spent “a good few Saturday nights” getting stitched up at the hospital.

Towards the end of high school Fred sat some Bible study exams, came first in New Zealand and set off for Divinity and Arts at Otago University in Dunedin, imagining he’d become a minister. “You go with your strengths, don’t you,” said Fred.

“Fred met his first wife Mary Skiller, who had two children from her first marriage, while working as a mountain guide on the Fox Peak one summer. They parted nearly twenty years later, and Mary died in 1975″

Gabi and Fred first met during her training in orthoptics in the early 1970s. By the mid 1970’s, they were working together at the Prince of Wales Hospital where he was head of the ophthalmology department and she was the senior orthoptist.

Fred was preparing for the National Trachoma and Eye Health Program, which needed a range of medical health professionals, and Fred asked Gabi if she would come on the road with him.

“Gabi – a beautiful young woman to whom I was strongly attracted – agreed, and that was the tentative and provisional beginning of our relationship,” said Fred.

Fred, Gabi and family at the Rotary Award Day at the Prince of Wales Hospital, Sydney. Photo: Michael Amendolia

“Gabi was just as nice, just as friendly to the last person as she was to the first, and having done it hundreds of times that day. Gabi didn’t alter her tone of voice because somebody was an old Aboriginal man or woman, or whether they were the station owner or the station manager, they all got the same courteous treatment…That kind of innate goodness is rare.”

Fred and Gabi married in 1980 and they had five children – Cam, Emma, Anna-Louise and twins Rosa and Ruth. Fred had two older children – Tanya and Ben – from his previous relationships.

its independence. The Foundation continues his efforts, working there to eliminate avoidable blindness caused by cataract and trachoma.

The Foundation works with the Eritrean Ministry of Health and the Asmara College of Health Sciences to support the training of eye health professionals, as well as in infrastructure building and eye health services. This work is guided by the country’s second National Blindness Prevention Plan.

As 600,000 Africans goes blind every year as a result of Cataract, demands for intraocular lenses produced by the only Intraocular Lens Laboratory on the African continent shows a significant increase.

Established by world’s renowned Australian Ophthalmologist, the Eritrea based Fred Hollows Intraocular Laboratory (IOL) so far exports over 2.2 million intraocular lenses to more than 50 countries in Asia, Africa, Oceania and Europe ever since its inception in 1994.

By applying international standard work procedures and state-of-the-art equipment, the plant has reached to a capacity of producing 200,000 intraocular lenses annually to satisfy the year-to-year growing demands.

“Mountain climbing got into my blood then and it was important to me for the next thirty years. It puts things into perspective risks and skills, life and death, gives you the measure of problems and people,” said Fred”

“Fred was many things to many people – a husband, a father, a friend, a skilled ophthalmologist and for a few politicians and bureaucrats, an irritating thorn in their side. But above all else he was a humanitarian, which made him a terrific doctor. He truly believed it was the role of a doctor to serve, to help those in need,” says Gabi  Hollows.

Pallbearers carry Fred Hollows’ casket onto a plane that will carry the professor to Bourke for burial. Photo: Oliver Strewe

Pallbearers carry Fred Hollows’ casket onto a plane that will carry the professor to Bourke for burial. Photo: Oliver Strewe

Fred was 63 when he died at his home in Randwick on February 10, 1993. Following an official state funeral at St Mary’s Cathedral in Sydney, he was buried, according to his wishes, in the red dirt of Bourke.

Fred had a special relationship with Bourke, a country town in northern NSW, Australia. He spent a lot of time there and made many good and lifelong friends. Gabi and the family treasure these friendships and the deep ties they have with the local community.

Fred first visited Bourke and district in the early 1970s with an eye team from the Prince of Wales and Prince Henry teaching hospitals. A successful trial the team conducted at nearby Enngonia was used as a model for the National Trachoma and Eye Health Program of the late 1970s across outback Australia. These vital screening and surgical services are continued today by eye teams from the Department of Ophthalmology at the Prince of Wales Hospital in Sydney.

Pretty much everyone in the district knew Fred and had a story to tell about him – about how he treated their eyes, or swore at them, or cajoled them, or joked and shared a yarn with them. Fred always left a lasting impression.

Fred’s grave in the Bourke Cemetery is surrounded by native trees, and boulders from nearby Mt Oxley are laid out in the shape of an eye – part of a sculpture created by local Indigenous artists, international sculptors and Bourke residents that includes a carved standing stone transported from Wilcannia.

Fred was buried with his glasses, a bottle of whisky, letters from some of his children, sawdust from his workshop, his pipe and a tin of tobacco. His coffin was draped with a pall that was hand painted by the people of Enngonia. 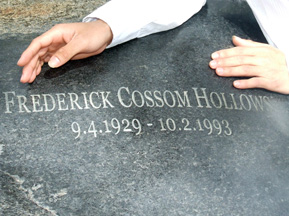 In February 2006, the original gravestone was replaced with a new granite sculpture commissioned by the Hollows family, created by Austrian Andreas Buisman and erected with the generous support of friends, the Bourke Shire Council and the local community.

Gabi Hollows and more than 150 family, friends and locals gathered at Fred’s graveside for the unveiling of the new stone. There was a smoking ceremony by members of the Indigenous community, a re-dedication by Father Frank Brennan, and speeches from Gabi and family and friends.

The sculpture captures Fred’s love of the outdoors and climbing, and its polished surface brings to mind the tiny intraocular lenses that Fred was so determined to bring to the developing world. The Hollows family is happy for visitors to touch and feel the rock, to climb on it or sit peacefully and contemplate life.